How genealogy and DNA helped take my maternal line back to Africa.

It all seems so simple at the beginning.  Spit in a tube and land a windfall of cousins and more importantly, ties back to Africa including the names of relatives, villages, and the ethnic groups our ancestors are from. On the other hand, family historians and genealogists who have been steeped in DNA research know that’s often not the case. DNA research and genealogy go hand in hand – one simply cannot operate without the other – and both only go as far as the amount of time you put into them.

Nearly two years ago, 23andMe introduced their African Ancestry Project.  Here’s more from the announcement of the project on their blog:

…23andMe is offering free kits to people with four grandparents from one of several different sub-Saharan African countries. These countries — Angola, Benin, Cameroon, Côte d’Ivoire, Democratic Republic of the Congo , Ghana, Guinea, Guinea-Bissau, Niger, Nigeria, Senegal, and Sierra Leone — all were major waypoints in the slave trade and have special significance for African Americans wanting to gain more insight into their ancestry.(1)

Many of us in the African American genealogy world were excited about having an expanded pool of autosomal DNA matching possibilities with traceable lineage in West Africa.  As the first results started populating, I received a message from a person who participated in the project.  My soon-to-be 99 year old maternal grandmother, Annie R. Atlas, was a 9cM match with a genetic cousin (who I’ll refer to as Igbo Cousin (IC)) with roots on both sides of their family in Nigeria among the Igbo. 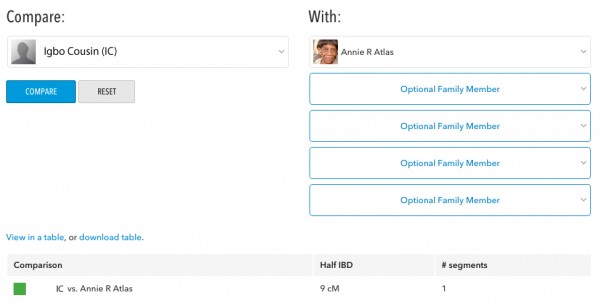 While some would scoff at a 9cM match, this is HUGE for those who conduct African ancestored genealogy research.  It’s enough to spend decades of your life just being able to find the names of your formerly enslaved ancestors, but to be able to genetically match someone who was actually born and raised in an African country AND has lineage on both sides going back beyond the Transatlantic Slave Trade?!?

Once I moved past my genealogical Toyota Jump, I began to do chromosomal comparisons with our new cousin IC and the rest of our family.  With the match measurement being as low as it was, many wouldn’t have attempted to narrow down the relation any further, but what can I say, I’m a daredevil. 🙂

To date, we have 15 maternal family members (including me) have taken tests with 23andMe. Their relation to each other spans the gamut of our family tree and this is deliberate – we wanted as many people to test as possible so that we could attempt to “reconstruct” as much of the genome of King Atlas, Sr. as we possibly could.

This cousin, who I’ll call A, is a descendant of King Atlas, Jr. and Alice Smith Atlas (nee Jacks, Tucker, Franklin), my grandmother’s paternal grandparents. This information has been confirmed through oral history, traditional genealogy, and finally DNA. Based on the International Society of Genetic Genealogy (ISOGG) wiki article, Autosomal DNA Statistics, the amount of DNA that cousin A and my grandmother share was right on the money with what’s average. 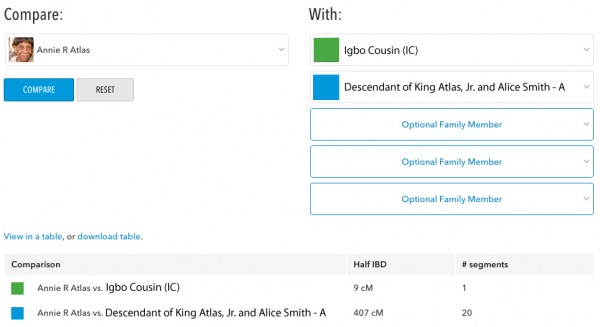 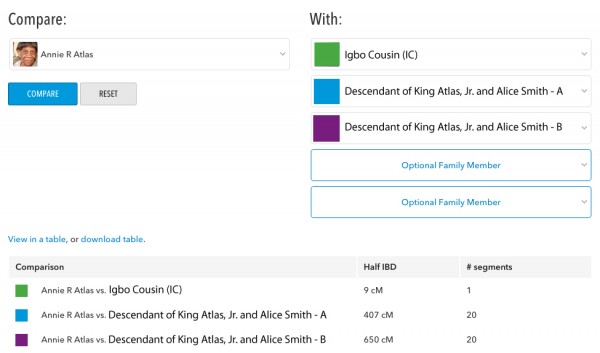 Now, this appears to be a definite slam dunk since my grandmother and two other known cousins (A and B) appear to match IC in the same exact spot on chromosome 11.  But, lets take this a bit further.

Although both cousins A and B match my grandmother in the same spot, we must be mindful that they have DNA from separate sides my grandmother’s family – cousin A from just the paternal side and cousin B from both the paternal and maternal side.  In order to be sure which side new cousin IC shares relation, we need to compare cousins A and B to cousin IC to see if they too match on chromosome 11 in the same spot. 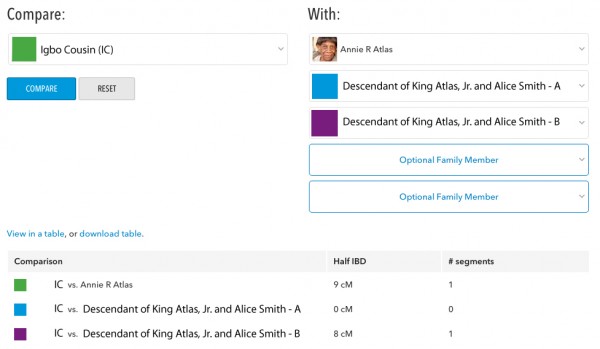 Thus, as noted above, the relation has to be on my grandmother’s maternal side of the family.

Further communication and testing of more genetic relatives of IC has indicated that our Igbo ancestor was from what is now Umuahia in Abia State in Nigeria and that the match is also on IC’s mother’s side.

IC will be testing even more relatives to narrow the relation down further to a specific village and even deeper family line.  Stay tuned for more! We’re excited!

1 thought on “Discovering Igbo Roots Through Genealogy and DNA”