She came, she saw, she conquered. And lived to almost 100 to tell about it all. 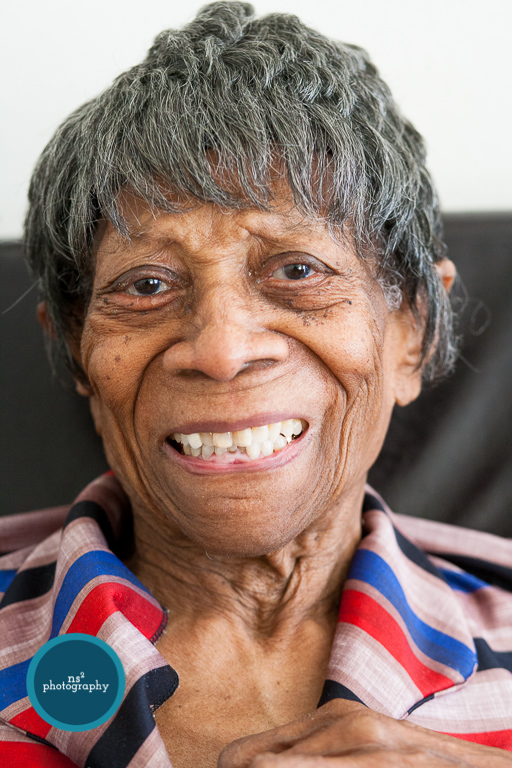 “In some ways, I feel selfish because even though she was almost 100 years old, I just knew she’d be around forever. But this morning…I just keep saying “She’s gone” over and over again in my head.

If she hadn’t lived, there would not be my mother and uncle, me, my sister, and first cousin, and our children.

If she hadn’t lived and been into family, I wouldn’t be teaching others across the world how to trace their family history – her family, the Atlas family – is why I started it all.

I literally saw her every year of my life even though for most of it, she lived more than 2,000 miles away from us.

Her Miller High Life with the peppermint in it, her million and one issues of Our Daily Bread, those gold lamé Daniel Green house shoes, her purse, the fact that she hated bread and would say “all that dough,” HER FOOD (the fried chicken!!! or that pound cake I swiped the recipe for)…

The time she fussed me how to make gravy from scratch, her love of New Orleans and how she passed it on to me, her disdain for the song “Old McDonald,” (especially the E-I-E-I-O part), the time she took me shopping in Chicago at Carson Pirie Scott or bought me Cross Colours for Christmas, or the time my play cousin got busted for dancing like James Brown in her wig.

How she dug in her teeth like she was digging for treasure. Having her and my mom at our house for three weeks last summer…”Your holy and righteous name Father…”

The way she said the word “fool” or cracking up harder when you heard her howl when she laughed…too many memories to recount. Grannie, you get credit for all 100 years. I’ll miss her. We’ll miss her. A lot.”

This Saturday, August 27, 2016 would have been my grandmother’s 100th birthday. We had spent years talking about what we’d be doing this week. A party. Good food. Lots of family and laughs. But as I sit her typing this, this week, I’m back to where I was on May 14. I still cant’ believe she’s gone.

Truth is, I’ve started and stopped this blog post five times in the last three months. Even now, I’m still not ready to write it, but the genealogist in me knows that I need to leave a footprint for her in this online world. As a researcher, we have so many scenarios that follow the phrase “Just in case…” I have to at least give her a “Just in case…” She’s got more than 1,500 genetic cousins alone. Some of them have reached out to me once they found out she died. Sometimes, it takes death to make folks reach out.

Her and her siblings were an amazing lot. Out of the 11 of them, seven of them lived over age 90, four of them living past age 95, and one almost made it to 104.

Nonetheless, in the celebrating her life, and commemorating what would have been an amazing accomplishment, here’s the video we showed at her memorial service along with the text from her memorial program. This is about all I can write about, for now. 🙁

The granddaughter of slaves, Annie was given the best education offered to African Americans in northeast Louisiana. She graduated from the East Carroll Parish Training School in 1933 and following graduation, she worked on the family farm located on Hood Lane Road. Her grandfather, King Jr., was known as a master agrarian who passed this skill down to his son, Louis. The family farm contained cotton, corn, melons, potatoes, turnips, and even a smokehouse along with animals such as cows, chickens, pigs, and more.

It was at this time that Annie had two children, a son, Cordell Baron, and a daughter, Barbara Jean.

In May 1945, Annie took part in the Great Migration of African Americans out of the south and moved from Lake Providence to Chicago, IL, the residence of her oldest brother, King D. Atlas, and oldest sister, Ethel Edna Atlas. She joined a large group of family members who already lived in Chicago such as her aunt, Alma Atlas Singleton, uncle, Shurden Atlas, and first cousins, Joseph Clarence Gray, Beatrice Singleton, Ruby Singleton Carter (David), and James Burl Singleton.

In Chicago, Annie was first employed as a domestic and then worked many years for Campbell Soup where she retired in 1974. Annie joined St. Luke Missionary Baptist Church and served for many years in the Keep Shining Unit and Missionary Society. She also was very involved with the senior citizen group of the Salvation Army.

Annie was well known for her cooking, in particular, her fried chicken and mouth-watering pound cake. It was requested so much that she would bake extras and place them in the deep freezer until they were needed by family and friends.

Annie loved to shop and many admired her sense of style in clothing. She loved to have a good time and was often seen with a Miller High Life beer with a peppermint candy in it. She was especially fond of spending time in New Orleans with her older sister, Cora Mae Atlas Thompson, and spent many years celebrating Mardi Gras there.

She was fiercely independent, never had a driver’s license, and lived on her own until moving to California with her daughter, Barbara, at the age of 90. Upon moving to California, Annie joined Amos Temple CME. She passed away on May 13, 2016 in Perris, CA.