If we’re going to open the door to dialogue about issues of race in genealogy, it’s gotta kicked wide open instead of just cracked.

This week, Pat Richley/Dear MYRTLE posted one of the most important genealogy blog posts that I have read in a LONG time. In “What Does Ferguson Teach Genealogy,” she addressed concerns made by my geneabud, George Geder, in a recent post he made to LinkedIn regarding the lack of speakers of color and topics regarding minority groups featured in the upcoming 2015 Legacy Family Tree Webinar schedule.

One of the most poignant things she said was:

“Last night, via cell I wrote to 13 eminent genealogists, most of whom I have known for many years. We have seen national and regional genealogy conference calls for papers come and go. I’ve sat in on society board meetings where annual conferences were planned, and it was like pulling teeth for someone on the board to obtain permission for an African American or a Jewish track. YES! This is happening in the supposedly enlightened 21st century. Regarding these 13 dedicated professionals, who happen to be People of Color, I wrote:

With each of you, I’ve witnessed first-hand the insights shared in your presentations. It pains me to see this divide, and I don’t know how to impart this to the typically European-ancestored program chairs for nationally-ranked genealogy conferences.”

I truly believe that now that someone of her stature is speaking out, the folks in charge will finally begin to listen.  If they are listening, I’d like to add a little seasoning to the gumbo that is being prepared.

Representation is a Start

I’ve been in the genealogy game for nearly 16 years. I’ve too witnessed people of color being marginalized when it comes to speaking opportunties at conferences, representation during online trainings/webinars, being passed over for opportunities to work on some of these “hit shows” the public is watching. Yes, that’s a big part of the issue, but it’s part of a much larger problem.

Let’s Be All the Way Real – This is Institutional

What exactly is “The ’65 Paradigm?” It’s that dreaded model that the genealogy community suffers from and has yet to get over or even fully acknowledge publicly.  It sounds foreign, but if you’re an African ancestored researcher, I can GUARANTEE that you have dealt with one, more, or all of the following at some point:

You head to a historical or genealogical society library to do research. They’ve got amazing record sets but hardly any to NONE of them feature African Americans in them because the folks who indexed or compiled them didn’t find it necessary to include African Americans. This is even prevalent online when you find census or other document indexes labeled “WHITES ONLY” like we still have separate bathrooms, water fountains, or I’m still considered to have a lack of average intelligence based on phrenology.  We’ve existed in the United States since before it’s inception…but yet, on paper, based on what this society has, it looks like we weren’t here until AFTER 1865…or even 1965…it’s still a 65.

My Solution: While adding new record sets is fabulous, if a society, library, or repository calls itself progressive or inclusive, their board or governing body should consider allocating a certain amount of funds towards a diversity expansion budget or line item.  This budget would be used to update their older exclusionary records OR to obtain record sets that are specific to minority groups that exist in the U.S. Not only will it appear as though they care about being inclusive (which would likely help to increase membership), but it would also send a message to other similar groups that they need to get on the bandwagon.

For more on how the Cumberbatch descendants reactive negatively to the depiction of their ancestor, Benedict, in 12 Years a Slaves, visit this link.

“I’m Proud of My Ancestors, But They Could NEVER Be Your Ancestors Too”

Soon, you start to dig for info on this slavecestor online and you find trees and/or DNA results galore from adoring descendants who could be or are your relatives. You reach out to some to see if they know of any family papers or documents that could possibly name your formerly enslaved ancestors or mention slaves. You either:

My Solution: Slavery is hard topic. I get that. But guess what? There is no way that we who are living now know the reasons, motivations, etc. of why a slavecestor (either male or female) engaged in sexual contact with our ancestor of African descent. Yes, it could have been rape. It could have been a legitimate love affair. They could have been “cut buddies” or even, a perhaps a Alfre Woodard situation from 12 Years a Slave. Regardless, none of us chose our ancestors or the DNA they left us. The best thing we can do with the situation is to be real about it, help each other as research buddies, and decide from there what we want to do. The information is ALREADY coming out and as DNA testing gets more popular and it’s going to get even more crucial we move past this. 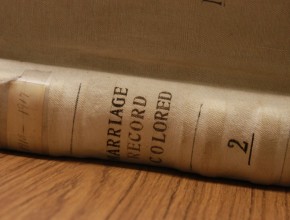 So, you’ve moved from just being in front of your computer doing research and connecting with other family history researchers online and you’re now attending conferences.  Awesome! You check out some of the larger ones and they have absolutely NO classes or tracks geared toward African American research. Like none. But yet, they’ve got tracks and classes on things such as German, Polish, Jewish, Dutch, or maybe even Alaskan (know that I’m joking here) research.

Perhaps you ask some of the planners why this is. They’ll usually say

“Oh, we USE to, but the turn out just hasn’t been good so we did away with it.”

Or, let’s be REAL and get to the bottom line: if there aren’t enough of us paying to attend which increases the planner’s income generation, there’s no need to even look at or address a minority community. I mean, there just “isn’t the audience, right?”

My Solution: If you are in charge of planning a conference, you NEED to have if not tracks at least sessions for people of color.  Period. It is absolutely unacceptable to call yourself a premiere organization or consider yourself one of the industry’s front runners if you are not doing this at this point. There is NO excuse.  Many can’t say that they “just don’t get submissions for speakers” either. You ARE getting submissions, but it appears as though you are just placing them in the garbage in favor of doing something else.

I speak at conferences that have attendance that is 95% people of predominately European descent, but that doesn’t mean that all the attendees at my sessions are African American. I have A LOT of researchers who appear predominately European who have African American ancestors. There are also session attendees who have bi-racial grandchildren or families with a plethora of racial backgrounds who want to be knowledgeable about conducting genealogy research those backgrounds as well as their own. We all come together to learn together.

One of the MAJOR issues I see is the lack of advertising that some of these organizations do to attract persons of color to their conferences. I notice that some of them partner with major names in the industry to have them serve as official bloggers at the conference, perhaps footing the bill for registration, travel/accommodations, and more so they can get these luminaries to speak positive about their event and thus drive more foot traffic that way.  I have seen VERY FEW of these conferences do this with folks of the same caliber who are people of color in the industry.

You can’t simply sit here and tell me there is no market. That’s a crock. (Sorry Ma LOL) There are nearly 21,000 people in Our Black Ancestry on Facebook. There are over 6,300 in the AfriGeneas group. There are over 8,800 in the DNA Tested African Descendants group. Combined, that’s a total of 36,100 people just between those three groups. And that’s JUST on Facebook.

You can’t sit here and tell me that we don’t spend money.  If our buying power is supposed to reach $1.1 trillion next year, we DO have money to spend, especially when it comes to television viewing and mobile phone usage, as the article suggests.

Bottom Line: If the genealogy community at large remains silent about issues of racism that exist within it, it is in fact supporting exclusionary behavior.  Period. Recently, I’ve said that I feel like the public at large expects African Americans to remain in a “perpetual sit-in” when it comes to how we react to being marginalized or treated unfairly; expecting us to take being beaten, having coffee, sodas, sugar and etc. dumped on us and not reacting to it since the world has been watching re-runs of this happening to us for fifty years through news clips. It’s almost like it’s ingrained in the collective cultural psyche and our cries are “unjustified” or if we DO speak out or fight back.

My cousin didn’t willingly get arrested for integrating that Trailways bus station in Jackson, MS in 1961 for this. Neither did her sisters, or my grand uncle, or many other people in my family and those not even related to me who were killed or fought for years to end discrimination against people.

What are practical ways you think this divide can be bridged in the genealogy community? Is it a lost hope or do you think we’re at a point for it to be really addressed? Sound off below.

6 thoughts on “This Started WAY Before Ferguson”